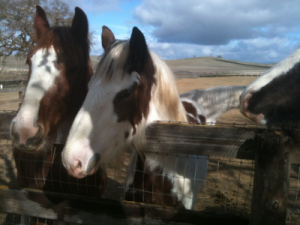 There’s always excitement when you are waiting for a new foal. But there are several things that need to be addressed during the pregnancy. First, vaccinations should be up to date to provide immunity to your new foal. Regular health care, such as dental care, parasite management and hoof maintenance, must be continued throughout pregnancy. As you get closer to that due date, observations should be increased so you can catch the changes that will be occurring before birth.

Vaccinations should be up to date for all brood mares before they are bred. Mares should be receiving an annual vaccination for Tetanus, the encephalidities (EEE and WEE) and West Nile Virus. In Southern Oregon, they should also be vaccinated annually for Rabies. If mares are housed with other horses, and especially if exposed to large groups of horses (horse shows, trail rides), they should also receive influenza and rhinopneumonitis vaccines every six months. If there is any history of strangles on the premises, mares should also receive an annual vaccine for strangles. At about 4 to 6 weeks before their due date, pregnant mares should receive a booster vaccination to stimulate additional immunity in their colostrum. The booster should include tetanus, EEE, WEE and West Nile Virus. Rhinopneumonitis, influenza and strangles should also be included if indicated.

Pregnant mares will have increased nutritional needs, especially in the last couple months of pregnancy. Be sure her teeth are ready to handle the food with regular dental care. Good quality hay should be readily available to the mare without competition from other horses. Grains and supplements should be gradually increased over the last few months of pregnancy. Body condition (amount of fat) should not be increased, as this could predispose the mare to problems during the birthing process. Once the baby is born, lactation will again increase the nutritional needs of the mare. She will need to maintain the increased feeds for 2 – 3 months after birth.

As the mare gets closer to birth, there will be many changes to her body. Mammary development may occur as early as a month before birth in maiden mares, but may not occur until immediately prior to birth in repeat mares. Most mares will develop ‘wax’ (or dried colostrum) on the teats just prior to birth. If the mare leaks a significant amount of milk prior to birth, much or all of the colostrum (first milk with important immunoglobulins) may be lost. If this is the case, be sure to call your veterinarian so you can both be prepared to treat the foal for failure of passive transfer. Milk calcium can be measured close to birth as a method of predicting when your mare will foal. Generally, when milk calcium exceeds 200 ppm, the mare is very close to foaling.

As early as 6 weeks prior to birth, the ligaments of the birth canal and the entire posterior reproductive tract will relax under the influence of the hormone Relaxin. If your mare has had a Caslick procedure at the vulva, this should be removed at 6 – 8 weeks before the expected date of birth to prevent tearing. Relaxation will be most evident within 24 – 48 hours of birth.

A safe place, away from other animals or exposure to the elements, should be provided for the mare to foal. Mare’s generally prefer a quiet, dark place to foal. Have a ‘foaling kit’ with tail wrap, antiseptic dip for the navel and sterile clamp or string to tie the cord prepared in advance. The area should be bedded with clean bedding to prevent contamination of the foal. Generally, straw is superior to shavings as it does not stick to the vulva and foal. The area should be large enough to allow manipulation of the foal during the birth process, if necessary. But the birth process should be allowed to proceed normally without interruption, if possible.

The birth process begins when the placenta ruptures and releases the amniotic fluid. Generally the front feet will appear first, followed by the nose at about the foals knees. If the hind feet appear first, the head is not at the knees or delays are noted during the birth process, call your veterinarian immediately. These are emergencies for horses. It is best to get the mare up and walking while you wait for the vet to arrive. This may assist in repositioning for the birth.

Once your foal is born, allow the mare to attend to the foal without interference. She will clean the foal and encourage him to begin nursing. The placenta should be passed within 2 – 4 hours after the foal. If the foal is not nursing or the placenta has not passed by four hours, call your veterinarian as these can be indicators of problems for the mare and/or foal. Your new foal should be examined by your veterinarian in the first couple of days. The vet will ensure that the foal has passed the meconium (first feces) and has taken the colostrum so they will continue to be healthy.