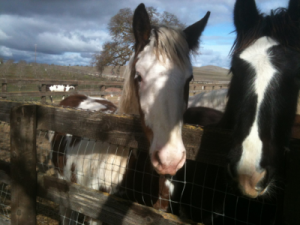 We all want to greet the new babies! When are they due to foal? The ‘average’ gestation for horses is 340 days, but ‘normal’ gestation can be as short as 320 days and as long as 370 days. The longest recorded successful gestation was 445 days, although most foals born after an extended gestation are small in size due to delayed uterine development.

There are many factors that affect duration of gestation, including genetics of the foal and season of the year when due to foal. Foaling date is ultimately determined by the foal, when he/she decides that development is sufficient. Remember that the terms ‘premature’, ‘dysmature’ and ‘postmature’ apply to the foal’s condition at birth and not to the duration of gestation.

Generally, foals born before 300 days gestation are unlikely to survive, although there are exceptions. Miniature horse pregnancies may be shorter than full-size horses and gestations as short as 280 days may produce healthy foals. Also, when a pregnancy is threatened, as by placentitis, fetal stress (cortisol) may hasten development resulting in normal maturity at very short gestational duration. Foals born between 300 and 320 days gestation are at risk of being premature and requiring some level of intensive care. Average gestation is 320 to 370 days, but longer pregnancies can still be normal.

Signs of impending parturition are generally not very specific. Changes in the mares demeanor or routine may indicate impending birth. The mare’s abdomen will become enlarged and pendulous in late gestation, but in the last week of gestation, the abdomen may become smaller as the foal moves into the birth canal. Over the last 6 weeks of pregnancy, the hormone relaxin causes relaxation of the pelvic musculature and vulva. The mare’s udder should begin enlargement about 4 weeks before parturition, with consistent enlargement and filling of the teats at 1 week before parturition. Waxing, or colostrum deposit on the teats usually happens within 6 – 48 hours of parturition. Milk calcium can be determined daily and when it reaches 200 ppm, the mare is very close to giving birth. Just prior to giving birth, the mare may become restless or even look colicky. False labor is possible, but keep watching, she is likely to reach to final stages of labor very quickly! Enjoy your new foal!